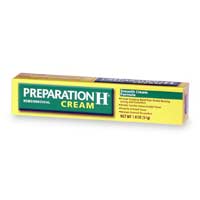 Many of us are familiar with Preparation H for its use in treating hemorrhoids. But did you know that Preparation H is also used to fight wrinkles and relieve puffy eyes?

The ‘secret’ ingredient in Preparation H is Bio-dyne, also known as Live Yeast Cell Derivative – LYCD. This formulation is found only in the Preparation H marketed in Canada and not in the US version. Preparation H Cream found in the USA does not contain biodyne, which was removed when the product was reformulated years ago. Instead, it contains phenylephrine HCI 0.25 % – a vasoconstrictor (shrinks vessels) that some dermatologists claim will constrict capillaries and temporarily reduce dark circles and puffy eyes. However, many individuals report irritation and burning when using the US version of Preparation H.

How does Biodyne work?

There is data to suggest that LYCD accelerates wound healing and is biologically active on skin cells. The active ingredient in biodyne has been isolated as a protein fraction containing a mixture of several peptides. It’s thought that Peptides offer benefits to skin including:

Used by those in the know

Listed in Diane Iron’s popular book “The World’s Best Kept Beauty Secrets”, Irons claims that many middle-aged celebrities use Preparation H to maintain their youthful looks. Some say that supermodels swear by it as a beauty essential. They claim that this hemorrhoid cream gives them an instant lift when eye bags bother them.

Though its bright yellow and plain packaging won’t win any aesthetic awards, if you’ve tried other products and they don’t work, you may want to consider giving reasonably priced Preparation H a try for puffy eyes.�